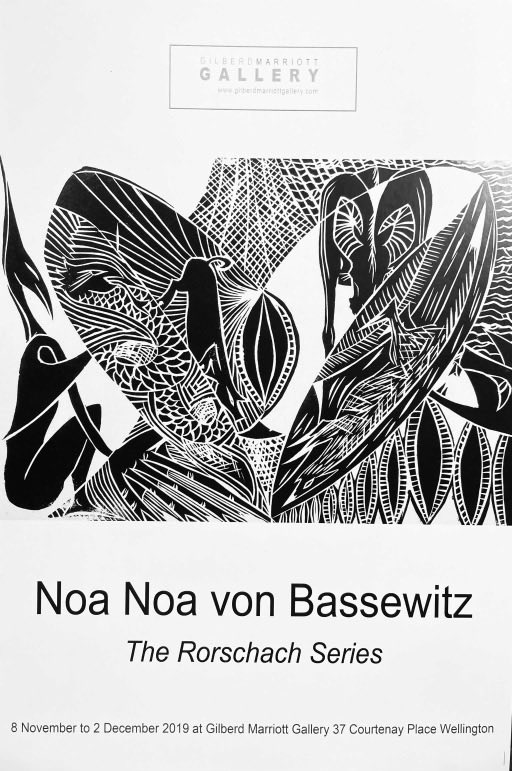 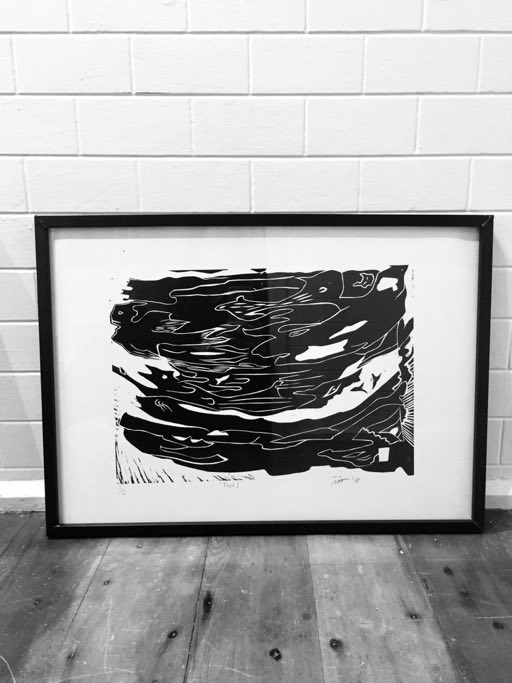 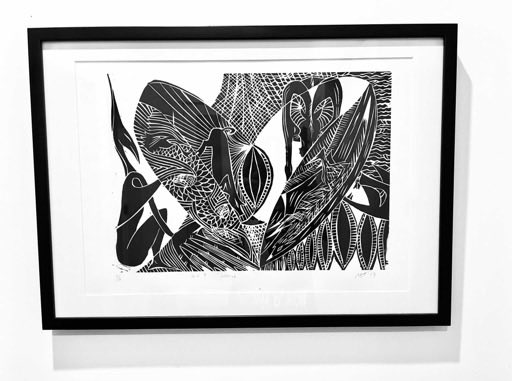 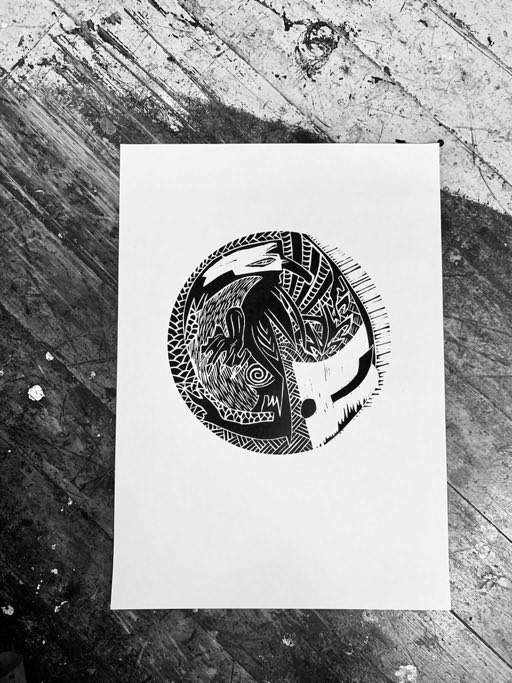 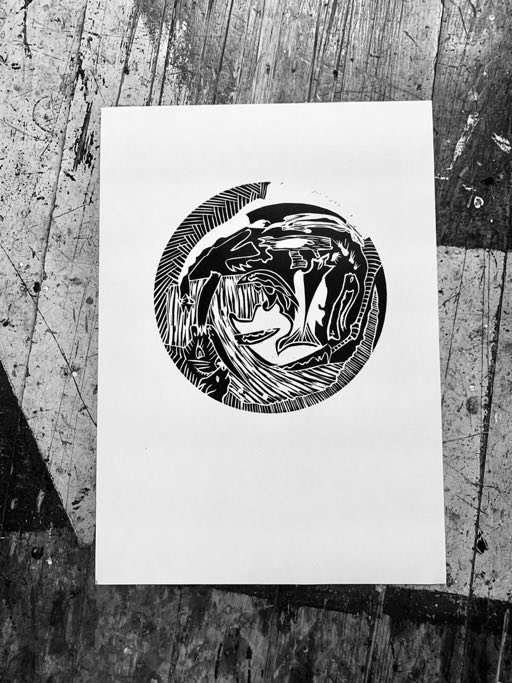 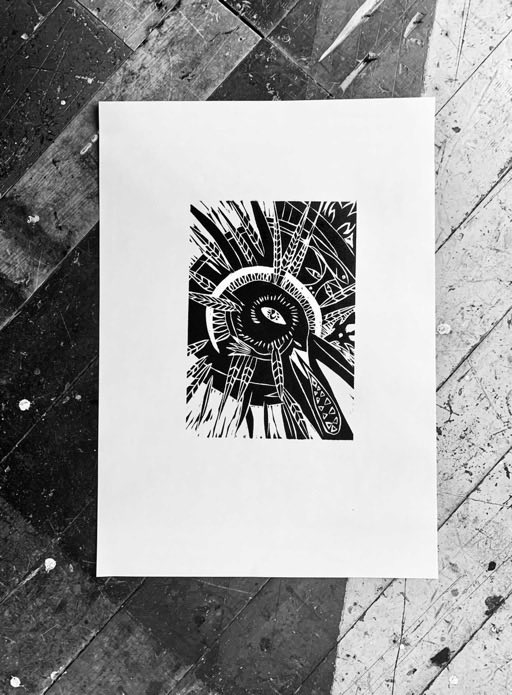 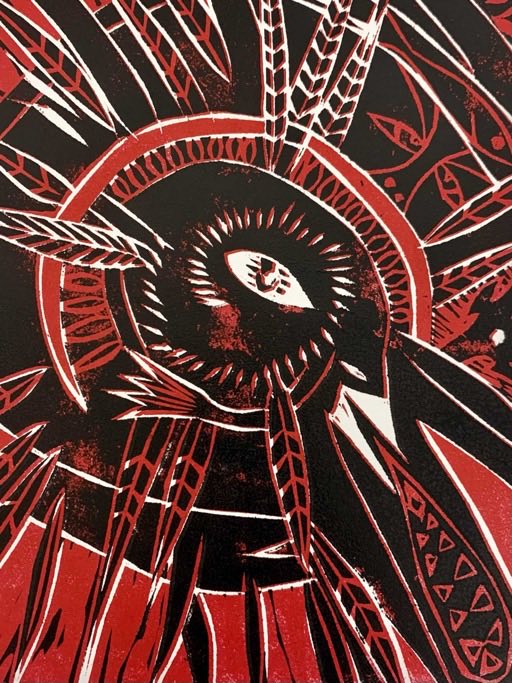 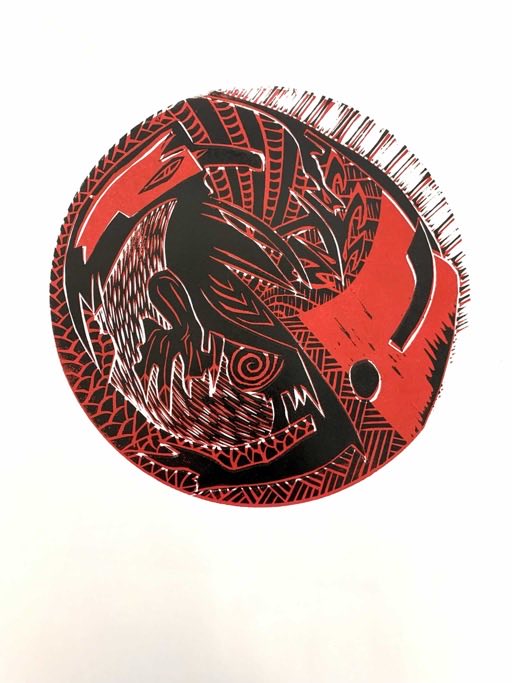 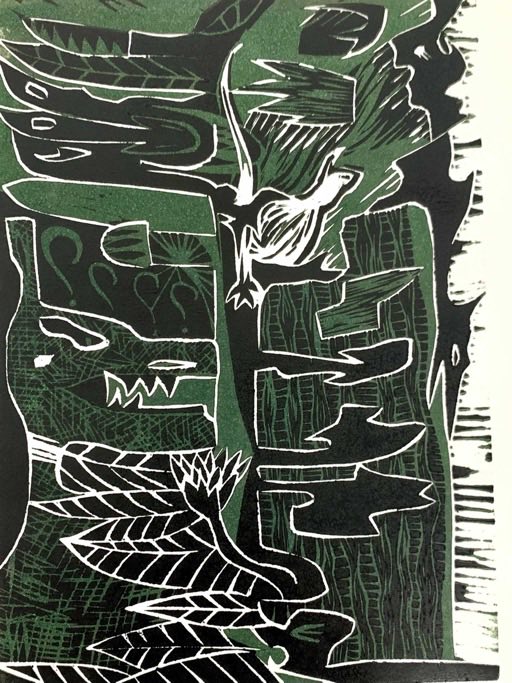 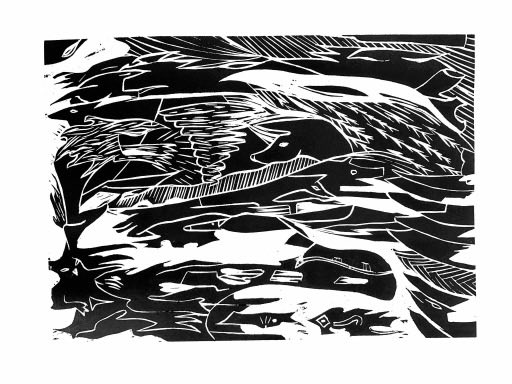 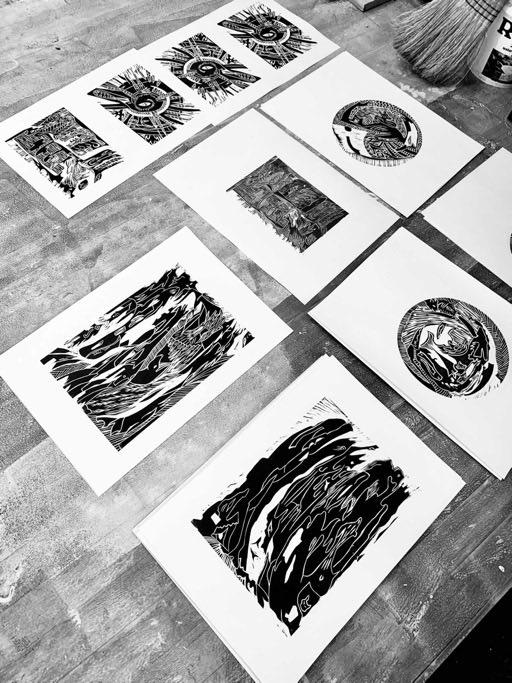 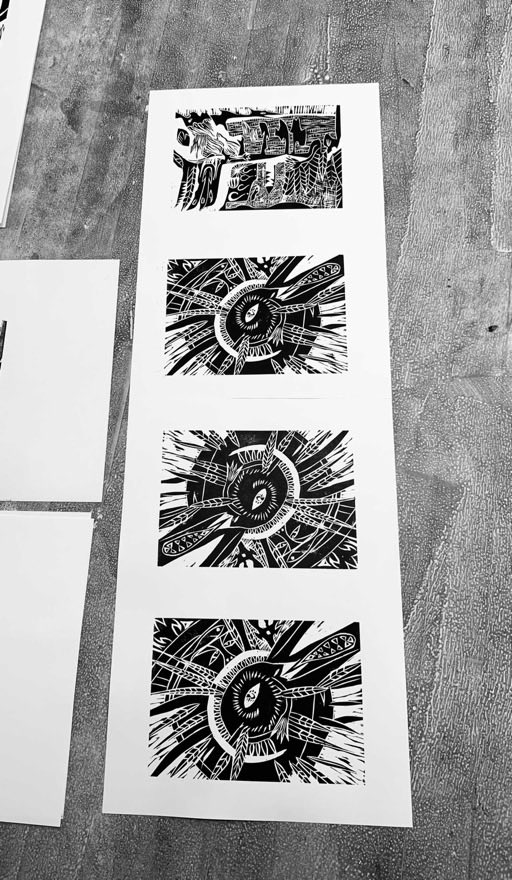 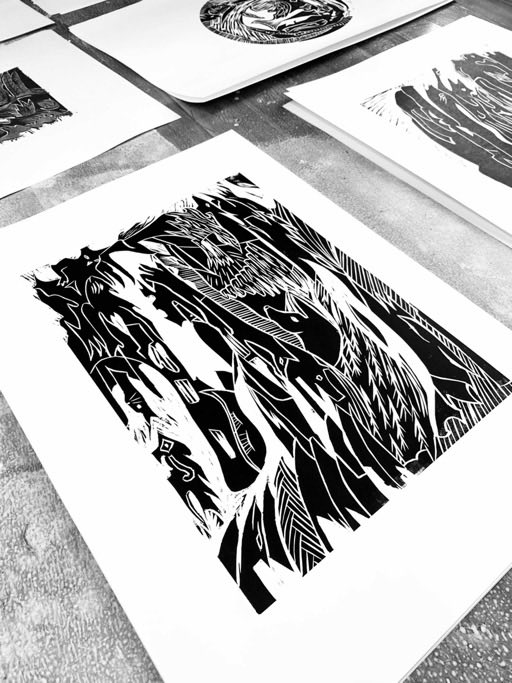 The Rorschach series explores one of the artists core themes -the subconscious- in particular its role in her art making. The Rorschach test* which uses evocative inkblots to unearth the workings of a persons subconscious mind, has been used here as a way to describe the artists creative process.

Two if Noa Noa’s print series “Rona and the Moon” (2009) and “The Imperfect Pull” (2018) have utilised the moon as an anchoring object and metaphorical symbol for the subconscious, in this new series the subconscious becomes the driving force for the creation of the print. The theme is the process. In clearing her mind the artist can be guided by the medium, emotion and the synergy created by not attaching to an outcome.

The Rorschach series does not refer to the look of the finished print, there are no cloudy ink blots in sight, there is nothing that could look like a bat with outstretched wings or kissing couple, it is is the process that is reminiscent of the Rorschach test, not the end result.

The prints are presented as completed “tests”, glimpses into the artists inner machinations. Like the personality test after which they have been named these prints are a first impulse/ an interpretation and an isight into the mind of the artist.

The artist draws from a rich cast of creatures, in settings that are evocative of joy or curiosity, strife and yearning, water, wood, other worlds beneath the surface. Her Maori heritage connects her with the pacific and the textures and patterns she uses give her work a strong sense of place within New Zealand.

The works although presented as completed tests are still only suggestive of forms, the beings are like those in a dream certain features are clear and others are lost by our innatention. Like the original tests, the prints have the potential to be interpreted in many ways, the viewer is naturally invited to see what they would like to see in the prints as the forms are not pre-defined.

Whales play and birds talk, the wolf is lost and questioning within the woods, animals flee like ghosts from the page, pigs and serpents and horned horses, livestock, cats and a giant dogs head all twist together to form half complete anthropomorphic landscapes. There is a feeling of water, of masculinity, of escape and domesticity intermingled.

Test 1 “emergence”
This work is the starting point and inspiration for this series, it is the print that most closely resembles an unformed ink blot. There is an urgency to the movement, a bubbling up from nothingness that wishes to be freed. It is intentionally raw. I stopped just in time.

Test 2 “Evocation”
This print unfolded in layers of exploration and grew into its power. This is an animalistic piece, of domestic and wild origin, they are called forth in the great storm of creation. There are Pharaoh dogs and mighty eagles, beasts half human half otherworldly. This is a provocation, a call into being.

Test 3 “Puawai”
The ‘blossoming’ in Maori. This piece marks the first of the second wave of this series, this is where the concept of Rorschach test became an inbedded part of my process. The ink blots bloomed out across the board, swept out at random by a brush and sponge. It was a sunny day when this print began it’s journey into the light. My first subconscious impulse saw growth, this developed into a talkative bird. Is this now flora or fauna?

Test 4 “Te Ngahere and the Wolf”
This print echoes the mirroring aspect of the Rorschach test, the blots were semi symmetrical. I was drawn to its treelike form and my minds eye drew out the creatures of the forest. My son Ngahere was facing a difficult period in his life and my concern for him comes through in this print, the dangers of the deep woods, the unanswered questions as well as the ripening blossoms and playful creatures above. There is fear and love in the tree of life.

Test 5 “Voyager”
The voyager lands on bended knees. For all his power, and all his conviction he is but a humble warrior on his own journey through life. This print simply followed the first lines of ink and this creature appeared, replete with his own capsule like world, his own waka for transportation. His masculinity is both his strength and his weakness.

Test 6 “Deep Sea Dreaming”
Here come the whales, the depths of my emotion brought out these beauties, like clergy from the ocean these sentinels simply bubbled up and swam into being.

Test 7 “Whenua”
I felt so thankful when I picked up this board, I felt a strong sense of gratitude for my art making life. This work feels like a celebration of becoming. I welcomed a cast of strong creatures, the serpent, the horned horse, the extinct Tasmanian tiger, and wild boars who all needed birthing. The mother/ ancestor on the side holds all creation in her longer fingers. This rorschach test has come to represent my thanks to mother earth - my imaginings of the creator.

The Process
The big explore, the freedom to go on a long journey down the rabbit whole of my subconscious and through so many individual ink blots to the other side. This was a labour of love, and an exercise in trust. I got lost in this work many times, each section was a miniature that came together as a whole, a land with many beings. Please do not restrict your viewing to the landscape format this print is presented in, head tilting is recommended to see your way around this multidimensional world.

*The Rorschach test is a psychological test in which subjects' perceptions of inkblots are recorded and then analysed uses psychological interpretation, complex algorithms, or both. Some psychologists use this test to examine a person's personality characteristics and emotional functioning. It has been employed to detect underlying issues, especially in cases where patients are reluctant to describe their thinking processes openly.The test is named after its creator, Swiss psychologist Hermann Rorschach. The images themselves are only one component of the test, whose focus is the analysis of the perception of the images. 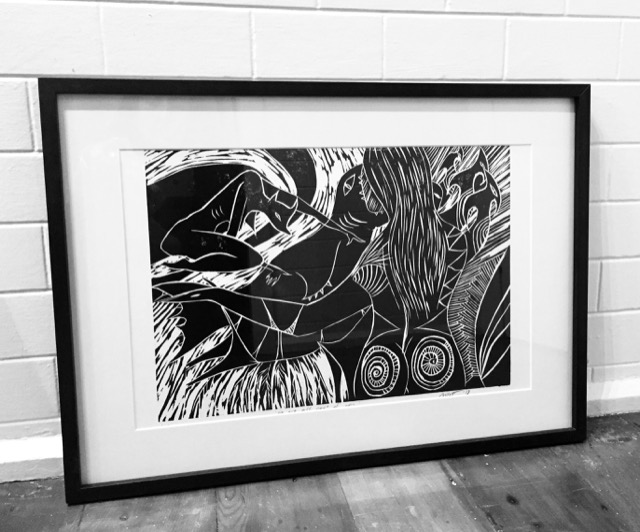 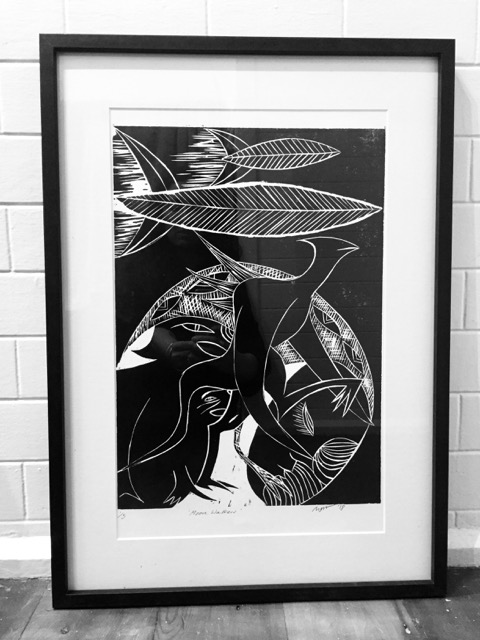 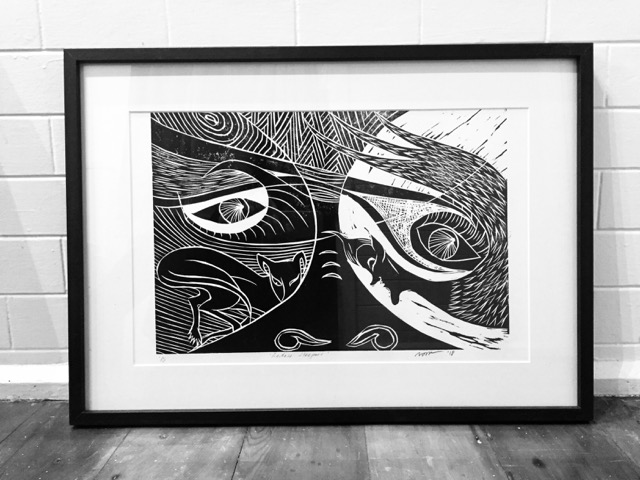 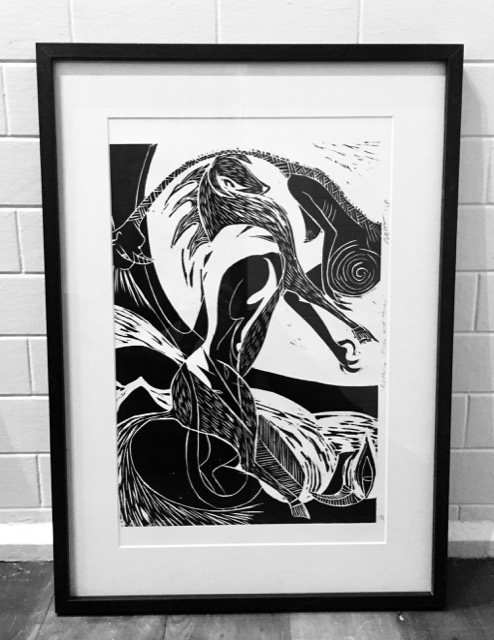 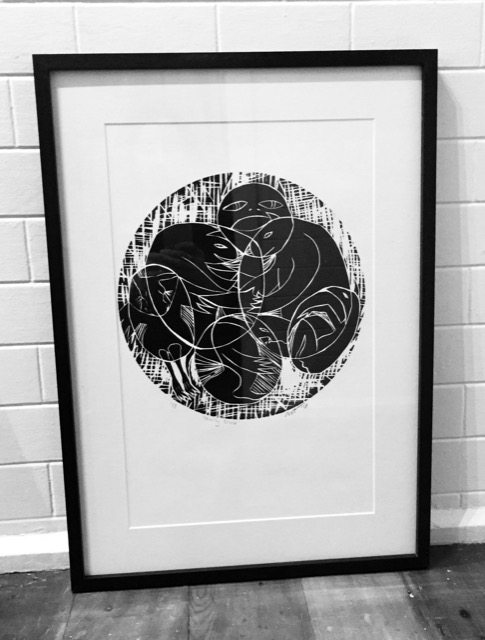 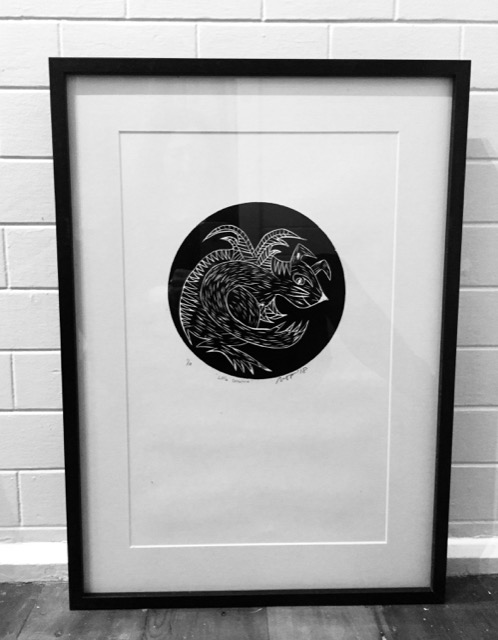 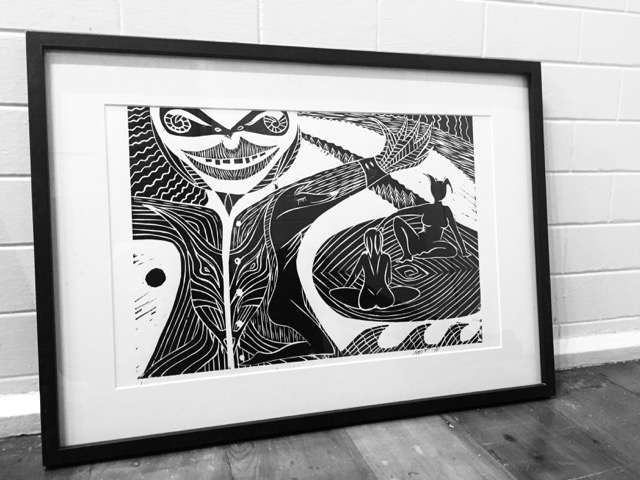 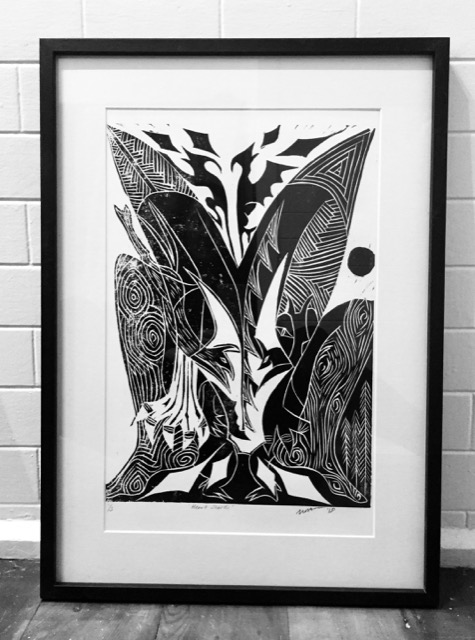 The Imperfect Pull wood-block print series is based on the Maori myth of Rona and the Moon. Female forms and mystical creatures cavort in the moonlight. There is yearning, there is movement, there is unease and there is loving connection. Look deeply and discover your own inner animal. Be drawn in but don’t let the moon steal you away! Limited edition original prints.

The print series was first shown at Inverlochy Art School, Wellington, in September 2018.

About the “The Imperfect Pull’ print series

The impetus for starting this series came from finding a faint and forgotten sketch on one of my old woodcut boards. It appeared to be a female form accompanied by a dog, but when my chisels started to work on this image they quickly went off on their own tangent. Creatures curled out of my subconscious. They were a familiar cast: the moon, full and famished females and the biting and playful characters of my earlier work, all came out to play. The characters have matured regardless of my artistic neglect in the past few years, so that this series feels like both an evolution and a homecoming.

During the formation of this series a narrative connection grew up between my work and Rona, the Māori mythical woman in the moon. With her hands grasping the water gourd and the ngaio tree, Rona tried in vain to keep herself grounded as she was pulled imperfectly from her earthly role of mother and wife towards the face of the moon, cool and separate. The grasping, wandering, searching forms that cross the face of the moon in my prints feel united by familial ties but hint at a disconnect.

Rona is re-imagined in this series. I do not consent to her condemnation and instead celebrate her omnipresent and powerful gaze that casts light over the creatures of the night. She has not left her family, she has not left her children, she is watching over them, she has a new job to do. Rona and the Moon have become synonymous with the flow of female energies, a pull towards a pro-creative potential.

The Imperfect Pull refers also to the internal struggle between my desire to create art and consider it a valid life choice and my pesky internal dialogue with its diatribe of denigrating whispers. Pull and Push. Generating this series involved re-acquainting myself with the variables of printmaking, i.e. printing presses, different papers, inks, rollers, chisels and weather conditions. This process led to many ‘imperfect’ prints, the presence and absence of ink created variations that were irreproducible but somehow perfect in a Wabi Sabi*kind of way.The name for this series “The Imperfect Pull’ pays homage to these early prints, and the learning and growth they facilitated. The disparaging voices have desisted. The pull has been embraced. Imperfection is all just part of the journey.

*In traditional Japanese aesthetics, wabi-wabi is a world view centred the acceptance of transience and imperfection. Characteristics of the wabi-sabi aesthetic include asymmetry , roughness, , simplicity, economy, austerity, modesty, intimacy, and appreciation of the ingenuous integrity of natural objects and processes. The aesthetic is sometimes described as one of beauty that is "imperfect, impermanent, and incomplete”.

Please inquire regarding availability via e-mail to:
noanoa - at - tamanoanoa.com.